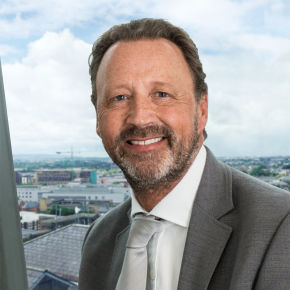 Steve Murrells became Co-op Group CEO in March 2017 having previously led the Co-op’s Food business since 2012. Steve now has overall responsibility for all the Co-op’s businesses - Food, Funeralcare, Insurance and Legal Services which now includes the recently acquired Simplify Probate, making the Co-op the leading provider of probate services in the UK. Steve has also overseen the acquisition of Nisa Retail Limited which now sees the Co-op wholesale to over 7,700 stores across the UK. The Co-op is the UK’s largest mutual business with more than 4.5 million members, 63,000 colleagues and a presence in every postcode area of the country.

Steve has led on Co-op campaigns to address issues that are important to Co-op’s members. He spoke on water poverty at the Global Citizen Festival in 2017 where he committed to donate 1p per litre from sales of all branded bottled water to the Global Water Fund. He has committed the Co-op to tackle the scourge of modern slavery and called on his fellow business leaders to follow his lead. Over a dozen businesses have subsequently signed up to work on Co-op’s Bright Future programme; supporting survivors of modern slavery with paid work placements. During Steve’s tenure the Co-op has responded to the call of its members to tackle loneliness raising £6.5m. Its campaign to get the issue recognised by the Government has led to the appointment of a Minister whose responsibility is to address the issue of loneliness.

As a senior executive at the Co-op Steve has been a key part of the team which has rebuilt the Co-op, relaunched its membership proposition and returned its iconic blue clover-leaf logo to the high street.

As CEO of Co-op Food, Steve was responsible for the Co-op’s £7bn-turnover food retail arm with its 2,800 strong network of stores and logistics operations which span the whole of the UK. He introduced the Co-op’s new retail strategy which focuses on convenience and turned around the business to grow its market share.

Previous to joining the Co-op Steve has held senior leadership roles in European and UK based food retail businesses, including at One Stop, Sainsbury’s and Tesco. Steve spent three years as CEO of Danish meat company, Tulip, before joining the Co-op.