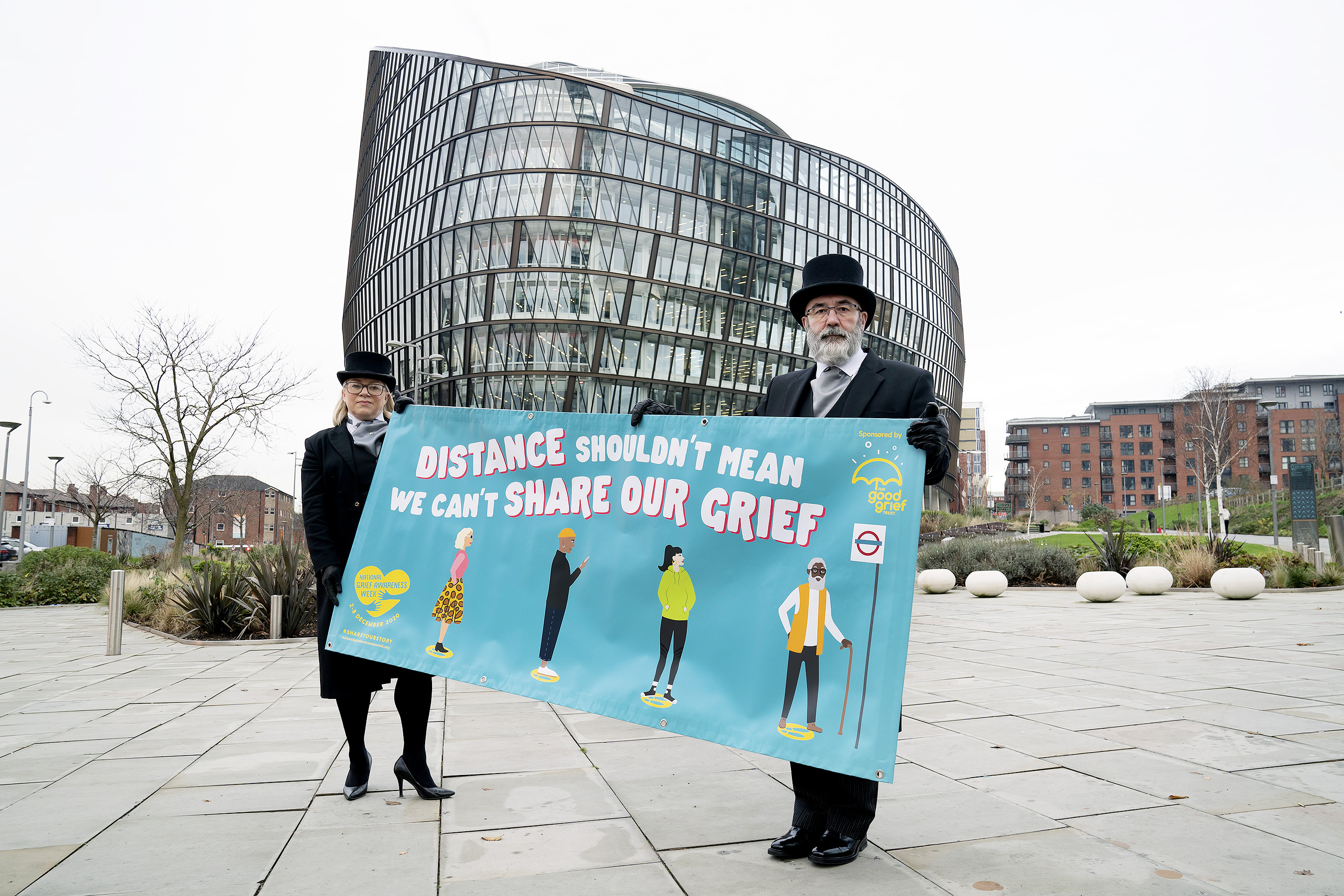 The UK’s leading funeral provider Co-op Funeralcare and the bereavement support organisation the Good Grief Trust joined forces ahead of National Grief Awareness Week and are working together to highlight the importance of bereavement support which addresses all forms of grief.

Research commissioned by Co-op Funeralcare, and conducted by YouGov, reveals that at least an estimated 8,816,221* bereaved UK adults have experienced the sudden death of a loved one over the past year.

The research findings also highlight how the unexpected nature of a death can impact the grieving process. Over a quarter (28%) of those who said they had lost a loved one unexpectedly during the past year said their loved one’s passing had a negative impact on their mental health compared to just 15% of those who experienced an expected death. Sadly, almost two-fifths (37%) of those who have lost a loved one unexpectedly said it made them think about the things they wish they had said to them, and 17% said the sudden death affected their relationships with other friends and family members. **

Given the unexpected nature of the pandemic, with 1 in 10 UK adults who have experienced a bereavement within the last 6 months experiencing a bereavement due to COVID-19, the nation could be facing a second wave of grief.

For adults in the UK who have experienced a bereavement in the last year, the time immediately after death (33%), during the funeral (33%) and in the run up to the funeral (22%) were noted as the times it was difficult to deal with their grief.

With many funerals significantly scaled back, and limits on the number of mourners permitted to attend funeral services and rituals, there is a concern many people’s grief is being delayed or worsened as a result.

This is also true for those who said they have lost a loved one unexpectedly, with 10% of respondents saying their grief was delayed and 16% saying their grief was prolonged. Susan Wright, a funeral service manager in West London, lost her Father after he contracted Coronavirus in April earlier this year, but the circumstances in which she was expected to grieve in have negatively impacted the grieving process.

Susan said: “It’s been seven months and I’m only just starting to process Dad’s death. I haven’t grieved, at least not adequately. Human interaction is integral when experiencing a bereavement, something we didn’t have during lockdown.”

Earlier this year, Co-op Funeralcare warned of the grief pandemic the nation was yet to face and sadly, this has been more than evident for the funeral provider when on the frontline supporting bereaved families throughout the pandemic.

__Sam Tyrer, Managing Director of Co-op Funeralcare, __said____: “Our colleagues have witnessed first-hand the devastating impact of the pandemic, and the wave of grief which followed. Tragically, our research reaffirms the vital need for adequate bereavement support. We are yet to discover what long term impact the restrictions faced during the pandemic will have but in the meantime, we will be persistent in seeking to improve the support available to those who have sadly been affected during a time of such significant loss. We will continue to work closely with dedicated and brilliant organisations such as the Good Grief Trust and make sure the voices of the bereaved are heard.”

National Grief Awareness Week runs from Wednesday 2nd December to Wednesday 8th December and is organised by the Good Grief Trust, an organisation which acts as an umbrella for hundreds of bereavement support services throughout the UK. Across the nation, famous landmarks and public buildings have lit up yellow in solidarity, and to show their support for those who are grieving.

__Linda Magistris, Founder and Chief Executive of the Good Grief Trust, __said____: “We know the impact of this pandemic on those grieving in isolation has been profound and many of those suffering a bereavement as a result of COVID-19, or under any other circumstance, have been left feeling alone and isolated.

“There is disparity in the provision of bereavement support across the country in normal times, however due to the disruption in delivery of information throughout this crisis, many of those bereaved have not received signposting to tailored help when they need it most.

“Our aim at The Good Grief Trust is to ensure that every person who is bereaved, receives our combined condolence and signposting card from day one. This resource will ensure they know they are not alone and that there is help and hope under our umbrella of over 800 local and regional services.”

Andy Langford, Clinical Director at Cruse Bereavement Care, said: “There are added complications for those who experience a death in a sudden and unexpected manner. There can be additional shock, severe distress, and trauma. It is more likely that for those experiencing a sudden and unexpected death, anxiety and severe low moods will be present. “Expected death can have a profound impact upon those closest to the person who has died. If the death has been anticipated for a time, it does not necessarily make the experience easier to handle. Having time to prepare may be helpful. However, witnessing someone go through a long and painful process before death can be heart-wrenching. Each situation needs to be individually considered.”

Shirley Smith, Founder and Chief Operating Officer at If U Care Share, said: “Bereaved loved ones may never receive the answers to the questions they have and sadly, may never understand. Like an old record with the needle stuck in the groove, these incessant questions remain long after the initial shock subsides, and the funeral flowers have wilted.
“We can’t apply a generic ‘one size fits all’ approach to grief. Each experience is unique, as is the person who has died and the relationships they had with their loved ones. It is important that we acknowledge how each form of grief differs and in acknowledging this, we can offer the correct forms of support.”

All figures, unless otherwise stated, are from YouGov Plc. Total sample size was 2097 adults. Fieldwork was undertaken between 30th October - 1st November 2020.  The survey was carried out online. The figures have been weighted and are representative of all UK adults (aged 18+).

Throughout the survey, respondents were asked to think about the most recent bereavement they experienced during the discussed time period.

*This figure is calculated on the percentage of UK adults who have suffered a bereavement this year, and the number who advised this bereavement was unexpected (51%).

**Respondents were asked to think about the most recent bereavement during the past five years which was unexpected.

The Co-op is one of the world’s largest consumer co-operatives with interests across food, funerals, insurance, legal services and health. It has a clear purpose of championing a better way of doing business for you and your communities. Owned by millions of UK consumers, the Co-op operates 2,600 food stores, over 1,000 funeral homes and it provides products to over 5,100 other stores, including those run by independent co-operative societies and through its wholesale business, Nisa Retail Limited. It has more than 63,000 colleagues and an annual revenue of over £10 billion.