A report from Co-op has shown that Brits have sought solace in retro home favourites and classic pub grub at home.

Sales data from Co-op shows that beer and wine sales have spiked as shoppers recreate bar tipples at home and also rustle up local pub favourites, such as chicken tikka masala, cottage pie, macaroni cheese, beef lasagne, sausage and mash, toad in the hole and beef stew and dumplings. The top five revealed:

Brits have also turned to nostalgic, quick-fix, packet desserts while stuck at home. This resurgence saw a massive 738% sales increase in dried trifle and 336% increase in custard powder, further supporting the nation’s return to more simplistic flavours and traditional products.

In terms of scratch cooking, the research unveils that households have reignited their love for cooking, with a third of the nation (33%) now finding more enjoyment when in the kitchen, compared to pre-lockdown. The most prevalent in those enjoying cooking more were aged 25-35 (45%). In terms of cooking skills, 39% of Brits now say their cooking skills have improved throughout lockdown.

The report indicates that 76% of the nation has cooked a traditional style dish during lock down, with sausage and mash the most popular meal. Traditional British cooking was the most popular cuisine throughout lockdown (31%), followed by Italian (24%) and Indian (8%). The report also shows that 37% of the nation have revisited dishes from their childhood during lockdown.

Data shows that 42% were cooking from scratch more and 32% think this will continue post-lockdown*. Statistics have also revealed home cooks have added on average two recipes to their repertoire and 38% will continue to build their cooking skills post lock down.

As shopping priorities shifted during the lockdown, consumers were shopping for food to last 10 days, compared to three days prior to lockdown, which has seen customers purchasing six times as much tinned fish (638% sales increase), three times as much dried pules and grains (175% sales increase) and tins of soup (72% sales increase).      Shoppers were also making more trips to the frozen aisle, as Co-op reports that its frozen ranges saw the largest increase in volume during the lockdown. The data from the report shows that 36% of people were keeping their freezers well stocked and 23% think that they will continue to do so after lockdown*.

The report also reveals that as at-home dining occasions have increased 60 per cent throughout lockdown, with households spending more time scratch cooking, which has seen consumers purchasing six times as much fresh meat, with pork (690% sales increase) and beef (519% sales increase) being the favourites. In terms of food waste, 51% reported that they wasted less food under lockdown and 45% think this behaviour will continue post-lockdown*.     Sales of herbs and spices increased by over 100% over the lockdown indicating that shoppers were spending more time cooking with the guide of recipes, trying to recreate favourite dishes at home.

In terms of alcohol sales, the most significant impact across the whole alcohol industry has been on beer and cider sales as pubs and restaurants would usually take 50 per cent of beer volume produced in the UK. In order to meet demand, grocery retailers picked up 45% of this lost volume in a bid to also reallocate products destined for pubs. At Co-op, sales of packs of 15 tins or more grew by over 1000% year-on-year.

Matt Hood, Commercial Director at Co-op said: “With an increase in at-home dining occasions during lockdown, customers turned to traditional recipes and pub classics to keep them comforted during the uncertain times. We’ve noticed that shoppers purchased six times as much fresh meat, with pork and beef seeing the biggest uplift, as we know households were spending more time cooking from scratch.

“Packet mixes such as instant mash potato, trifle and custard, as well as canned meats and fish and even pickled onions also sold really well, as it looks like some consumers adopted habits similar to those of the 1970s. As Brits faced an indefinite time in lockdown, long life pantry goods, tinned foods and baking products saw a huge increase in sales, as well as baking products and sharing snacks as customers were shopping to last them more days.”

Dr Christy Fergusson, The Food psychologist said: “During a time when people haven’t been able to spend time with family and friends, it’s no surprise they have been trying to recreate those feelings of comfort, relaxation and joy through their meals. For many, recreating their favourite pub meals will signify comfort and familiarity in a time when life has felt uncertain and stressful. And the taste of food can also trigger associative memories so could explain why Brits have been turning to nostalgic desserts such as packet trifle and custard which may remind them of fond childhood times with family and friends.” 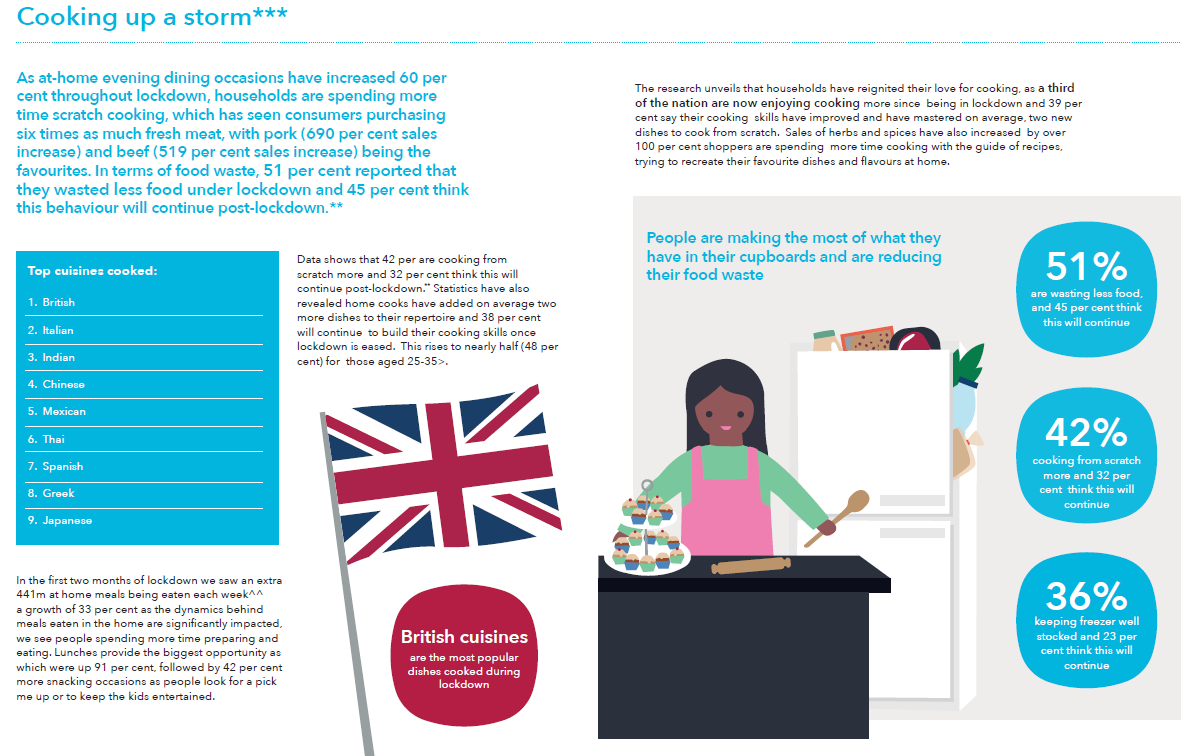