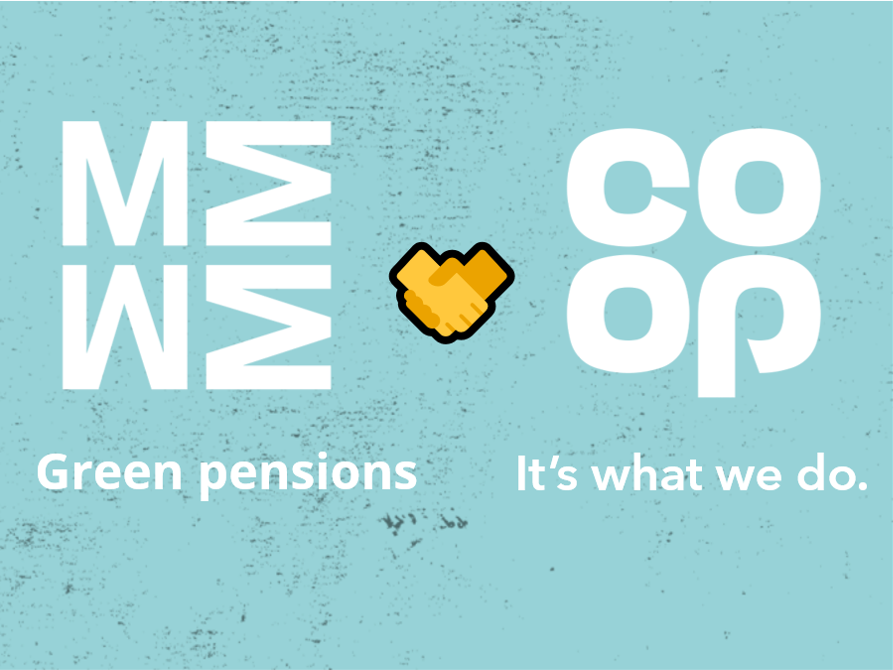 Co-op has announced a partnership with sustainable pensions campaign, Make My Money Matter, as part of its ambitious 10-point plan to achieve net zero by 2040.

Make My Money Matter is a campaign working to green the £2.6 trillion in UK pensions by giving millions of savers more voice and choice in how their money is invested. It is a crucial year for climate with COP26 on the horizon and Make My Money Matter is working with businesses to make sure that their pensions investments align with their efforts to achieve net zero.

As part of the partnership, the Co-op will engage with its employees to increase transparency on how their pension pots are invested and better understand their sustainability priorities. The move builds on changes that Co-op and its scheme trustees made in 2019 to introduce a sustainable, lower carbon default option for its DC pension scheme by being one of the seed investors in the Legal and General Future World Multi-Asset Fund, as well as the changes to its self-select funds earlier this year, which gave members more options to invest in organisations with sustainable credentials.

Co-op will also work with fund managers to understand how they plan to align themselves with a move to a Net Zero economy, and its largest pension scheme is also committed to reporting on its carbon footprint annually from next year.

The partnership with Make My Money Matter has been announced as part of the Co-op’s 10-point plan to achieve net zero by 2040. From products and packaging to power and pension fund investments, the comprehensive plan details how the Co-op will reduce the impact of its operations and products across its Food, Funeralcare, Insurance and Power businesses.

Gary Dewin, People Director at the Co-op said: “We are clearly facing a monumental climate change crisis and must recognise that we have a part to play. We simply have to do more and quicker.

“By partnering with Make My Money Matter and committing to engage with our members and our pension funds, we’re providing our members and colleagues with another way to help combat the climate change crisis through sustainable investments.”

Tony Burdon, CEO at Make My Money Matter commented: “The Co-op is a company known for its values, and its commitment to unleash the power of its pension scheme is a great first step to build a future that is actually worth retiring into.

“We believe that green pensions should be the new normal for any organisation committed to tackling the climate crisis – and that all new employees should be given a green option when starting a new job.

“With COP26 on the horizon, this is a crucial year for climate across the globe. With a growing demand from across society to “build back better” from this pandemic and to build a net zero world, the time for action is now.”

Co-op's 10-point Climate Plan: 1. Make long-term changes to how we do business We will be a net zero business by 2040, for both our operations and for our products. 2. Set clear short-term milestones We will reduce the impact of our operations by 50% and our products by 11%, both by 2025, in line with climate science. 3. Rapidly reduce carbon from our operations and products We will take clear, practical steps to reduce carbon from running our business and the products we sell, reporting progress publicly. 4. Compensate for our climate impact We will take responsibility for our ongoing emissions - our operations will be carbon neutral from 2021 and our own brand products by 2025. 5. Make lower carbon choices easier for customers We’ll support our customers and members to move to lower carbon lifestyles, starting by price matching between our Co-op own-brand plant-based and meat or dairy-based equivalent. 6. Direct finance towards reducing carbon We will align our finance, including carbon offsets and pension funds, to support lower carbon investments. 7. Help suppliers on the climate change front line We’ll support farmers, producers and communities to transition fairly to a low carbon future. 8. Campaign for climate action We will be advocating with Government to press for the necessary systemic change, including a call for greater climate impact disclosure and support for the most vulnerable. 9. Co-operate for change at scale We will actively work together across our sectors, sharing our plans and solutions, seeking to align rather than compete. 10. Make our climate plan a priority Underpinning these goals, we are linking the pay of our Food CEO to achieving our carbon reduction targets.

About Co-op The Co-op is one of the world’s largest consumer co-operatives with interests across food, funerals, insurance, legal services and health. Owned by millions of UK consumers, the Co-op operates 2,600 food stores, over 1,000 funeral homes and provides products to over 5,100 other stores, including those run by independent co-operative societies and through its wholesale business, Nisa Retail Limited.

Employing over 62,000 people, the Co-op has an annual turnover of £10 billion. As well as having clear financial and operational objectives, the Co-op is a recognised leader for its social goals and community-led programmes. The Co-op exists to meet members’ needs and stand up for the things they believe in.