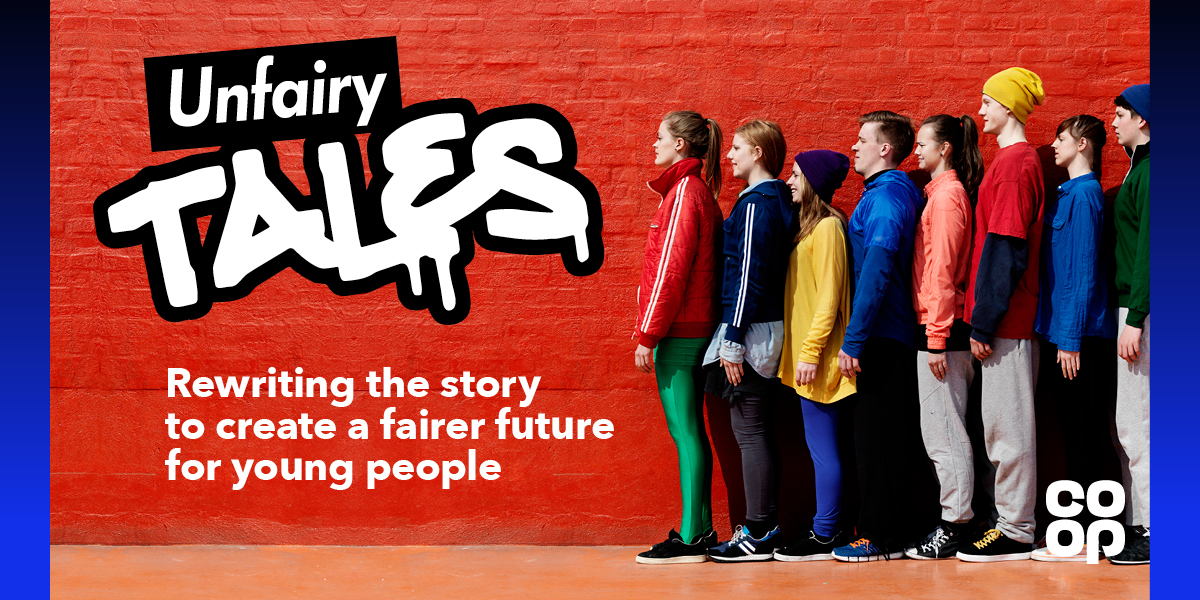 Children as young as 10 years old think they will need to leave the area where they live to achieve what they want in life, a new study from the Co-op has revealed, spotlighting the unfair realities young people across the UK are facing.

Despite the Government’s defining mission to ‘level up the UK,’ by giving everyone the opportunity to ‘stay local but go far,’ through the recently published Levelling Up and Regeneration Bill, less than 4 in 10 young people (36%) believe that what the Government does will have a positive impact on their life.

Towns and villages across the UK will see their talent pool reduce by almost half, with 48% of 10 – 25-year-olds set to pack their bags and look for opportunities elsewhere, mirroring an increased belief that relocating is essential to achieve their goals. And when it comes to education and career opportunities, over a quarter (28%) of young people feel there are too few where they live. 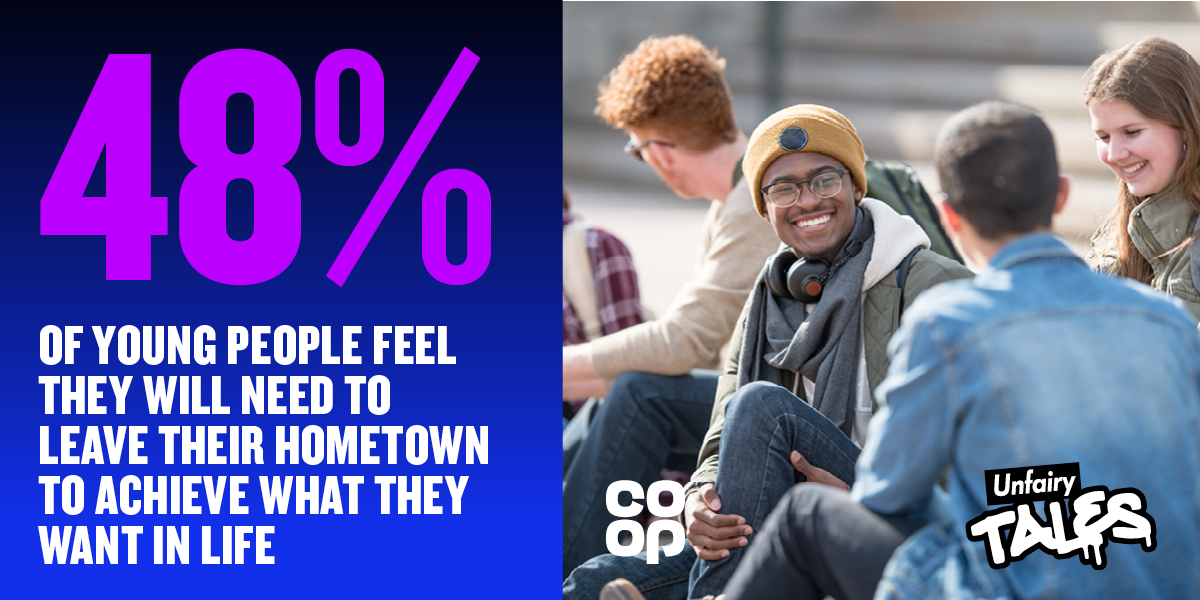 With more than three-quarters of young people (76%) wanting to do something that makes a difference in either their area or wider society, the lack of fair opportunities risks dismantling young people’s ambitions for the future and the chance for them to make a positive difference to wider society.

Year 10 student Rae Daly, aged 14, said: “I know that if I were to stay in my hometown that my future career would be a lot more difficult to achieve as there’s a lack of opportunities for me. I’m about to start my exams and already I’m having to think beyond them and where I’ll need to move to in a few years’ time – adding even more worry.

“The government needs to give more focus to young people my age and provide better opportunities to help us with our future.”

The research demonstrates that young people are acutely aware of the inequalities facing them when thinking about their future education and work. Almost half (47%) of 10-25 year olds see financial pressures as one of the top five challenges they will face in the next 12 months, whilst over a half (54%) of 13 – 25-year-olds feel it will be harder to save money for their future.

When it comes to work and careers, nearly a third of young people (29%) believe the rising costs will make it harder for them to get a job and a fifth (16%) of 10 – 25-year-olds feel it will affect their career goals.

The rising cost of living presents fresh mental wellbeing challenges for young people with over a third (35%) of 13 – 25 years olds believing the rising price of everyday things will negatively impact their long-term mental health, this is a particular concern amongst older age groups, with nearly half (45%) of 21-25 year olds.

In response to the findings Co-op is today announcing a 3-year Virtual Work Experience programme, working with Springpod to reduce the barriers to opportunity for young people. The programme will see 26,000 young people from disadvantaged communities develop experience, confidence and skills to ready them for a range of careers. 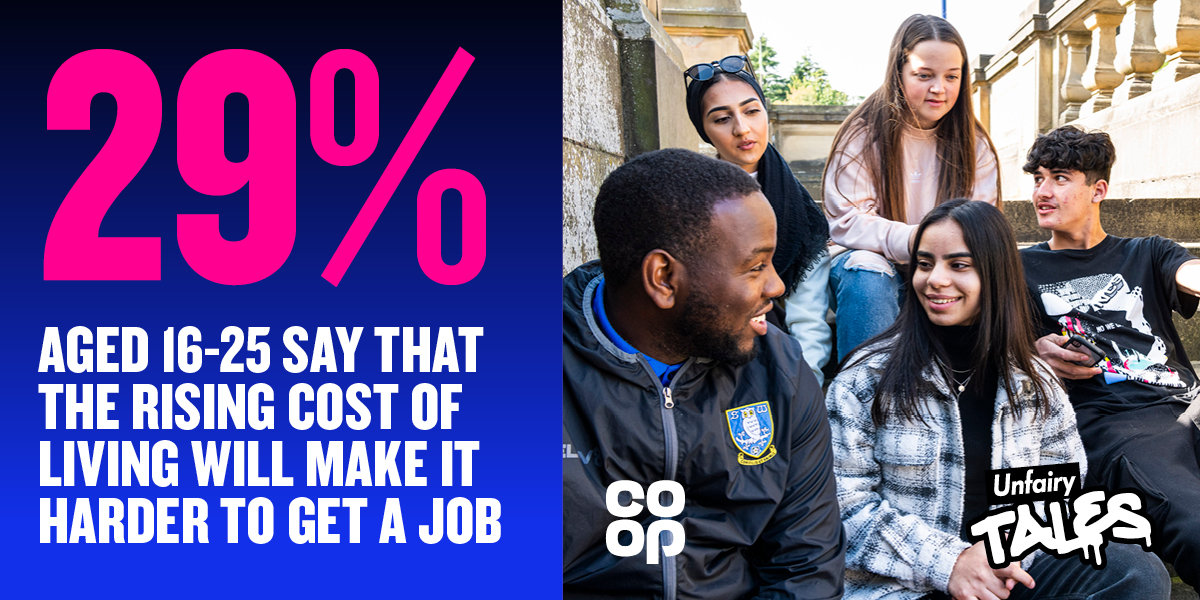 Shirine Khoury-Haq, Interim CEO of Co-op said: “With young people, bearing the brunt of yet another national crisis, now more than ever, we need to take urgent action to tackle inequality of opportunity, levelling up for young people everywhere and to look from a business community as to how we can support.

“Young people are the DNA and future of this country, aspiring to so much – but as the research shows while talent is spread across every community, opportunity is not. Too many feel that owing to accessibility of opportunities and the rising cost of living they won’t have the chance to achieve their aspirations.

“At the Co-op we believe that young people should hope for better and have the fairy tale ending they so rightly deserve. That’s why we have a number of youth-led programmes, including our Young Members’ Board, our innovative virtual work experience programme, to our work with the Peer Action Collective (PAC), all helping to give young people fairer access to opportunities and come together to make their voices heard. Also, our Co-op Academies Trust is already working in many of the Education Investment Areas highlighted by Government as needing more support.” 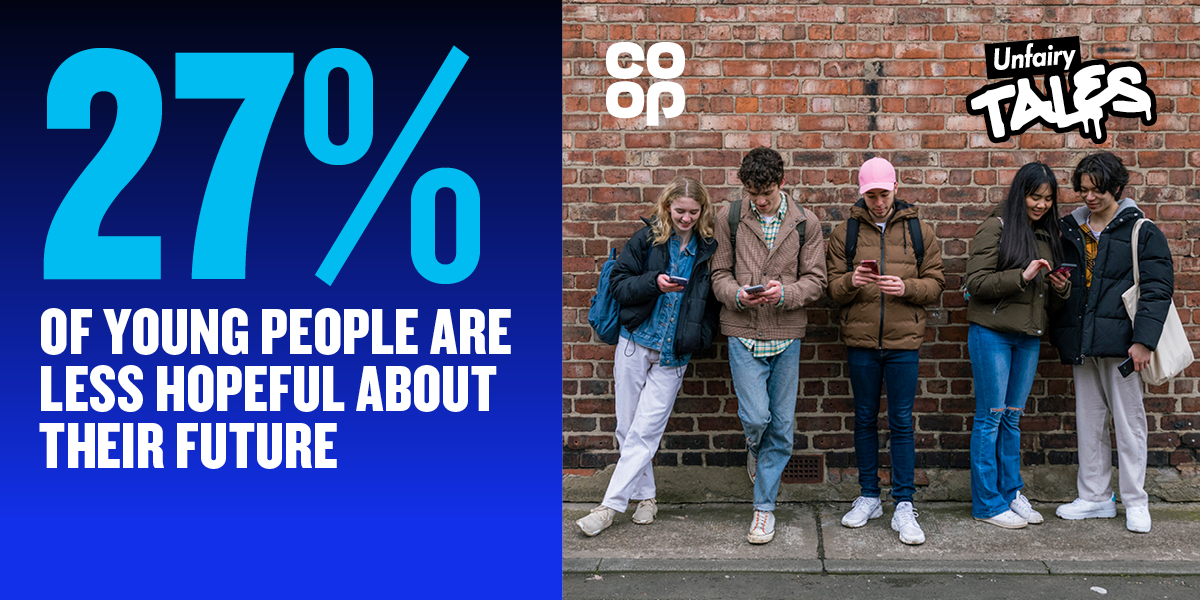 Sam Hyams, CEO of Springpod, said: "It's great to be partnered with the Co-op to provide equal access to young people for work experience, especially those from lower socio-economic backgrounds who would often not be provided with such chances. We're excited to run the programme and highlight the roles available within the business and give students the ability to learn about how they can shape a career in this sector."

In response to the findings Co-op has today release an in-depth report into the unfair realties that young people are facing - available to read here.

To read the full media report, right click to open the below.

Employing over 60,000 people, Co-op has an annual turnover of over £11 billion. As well as having clear financial and operational objectives, the Co-op is a recognised leader for its social goals and community-led programmes. Co-op exists to meet members’ needs and stand up for the things they believe in.

How Co-op is creating fairer opportunities for young people

• Education was one the Co-op’s founding principles, with the Co-op’s involvement dating back to 1844. The Co-operative Academy Trust is dedicated to offering children a better education with 28 academies in West Yorkshire, Greater Manchester, Staffordshire and Merseyside and ambition to grow up to 40, with all but one operating in EIA’s set out by the Government • Apprentices - Apprenticeships play a critical route for young, hard-working people enabling them to get to a long-term career, that’s why we support up to 750 active apprenticeship across our Co-op, from the support centre in Manchester to the frontline in UK high streets, in Food stores and funeral homes. • Co-op’s Apprenticeship Levy Matchmaking service - designed to create even more apprenticeships from within under-represented groups, including black and ethnic minority candidates and those from low socio-economic backgrounds. As of April 2022, 546 apprentice opportunities, worth approximately £5m, have been matched with apprenticeships in care, construction, engineering and health and science being supported and spanning apprenticeship standards from level two to six. It’s a great example of what can be achieved through co-operation.
• Co-op Young Business Leaders - In October, Co-op started its second cohort of Young Business Leaders, offering a paid work placements to BTEC Business Studies students at Connell Co-op College, giving them meaningful work experience and an opportunity to develop their employability skills, giving them a competitive edge in the job market. • Co-op Young Members Board – Co-op’s Young Members Group is a group of Co-op Members aged 16-25 from across the UK, coming from different backgrounds and experiences with different skills, who all work with Co-op on projects and activities with young people at the core. Each member of the Co-op Young Members Group has their own network of young people to involve in their work. The group’s vision is to inspire a movement of young people who co-operate for a fairer world. • Co-op has recently finished a small pilot programme at its new Depot Biggleswade to run an employment programme aimed at supporting minority groups or individuals from Lower Socio economic backgrounds into employment at the depot - this involved ringfencing vacancies, working with a delivery provider and local charities, youth organisations and local causes to recruit onto the programme - supporting 12 people through a 4 week employability course and offered 8 a role with Co-op, all of them have developed skills and confidence and meet our criteria around social mobility and minority groups inc. • Co-op’s approach to hybrid working in many support roles means there's no longer a need to live where you work thus enabling people to stay within their community but still access opportunity in some of our functions over and above the breadth of opportunity in food stores / funeralcare - c.4000 vacancies. • Co-op operates in many of the Educational Investment Areas (EIAs) as outlined by the Levelling Up Strategy, as such many of its vacancies are open to young people in areas of most need. • The Co-op uses its Community Wellbeing Index, Location mapping and insight on the EIAs to help identify where targeted interventions are needed and can have a the greatest impact in communities to support young people in developing the skills and confidence needed to start their careers • Additionally Co-op has continued its investment in the free to use Co-op Careers Hub which is open to candidates, including Young People, to access free tools, knowledge and insight helping them to be more successful in their job search • Co-op employs in the region of 13,000 young people across our businesses and over 750 apprentices each year • In order to help young people contribute to reach their potential, the Peer Action Collective is a £5.2 million programme which aims to give young people the chance to make their communities safer, fairer places to live. It is funded by the Youth Endowment Fund, the #iwill Fund (a joint investment between The National Lottery Community Fund and the Department for Digital, Culture, Media and Sport) and the Co-op group.

ICM interviewed a nationally representative sample of 2,000 young people living in the United Kingdom aged 10–25 via an online survey between 24 March and 5 April 2022. Participants aged 10–15 (and some aged 16–17) were recruited through their parents; both participants and parents gave their consent to take part in the survey. Unless otherwise stated, not all differences between demographics are statistically significant. Any differences which are labelled significant have been tested at the 95 per cent confidence level. The research was conducted in accordance with ISO 20252 and ISO 27001, the international standards for market research and information security management.