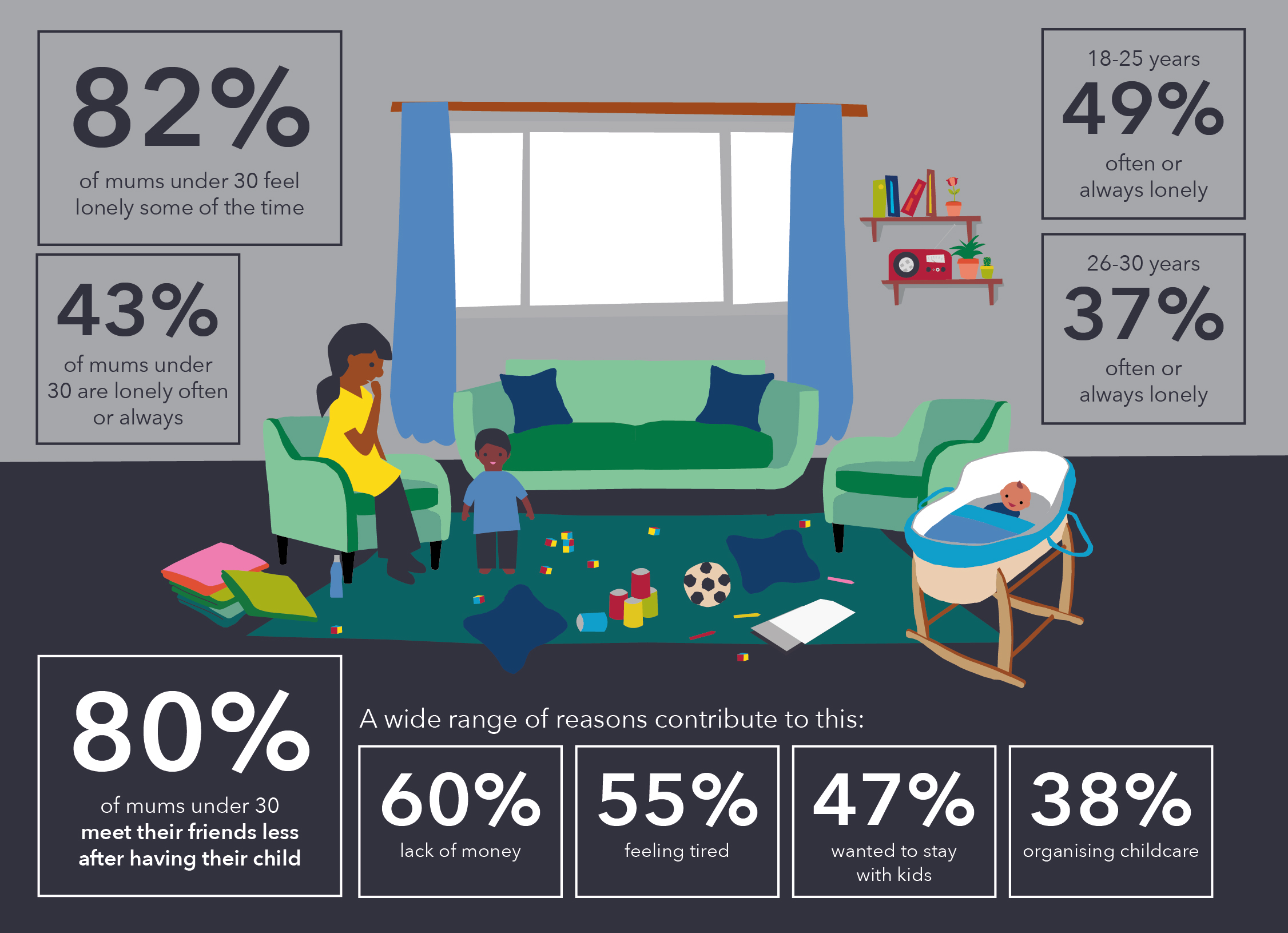 The extent to which young mothers are left feeling lonely and isolated after having a baby was revealed today (2 May) by the Co-op and the British Red Cross.

New research[1] shows that a staggering 82 per cent per cent of mums under 30 feel lonely some of the time while more than four in 10 (43 per cent) are lonely often or always.

The survey shows a sense of isolation is felt most acutely by younger mothers. Almost half (49 per cent) of mothers aged between 18 and 25 are often or always lonely compared with 37 per cent who are aged between 26 and 30.

This new research also shows that more than 80 per cent of mums under 30 say they meet their friends less often after having their child.

This is down to a wide range of reasons, almost six in ten (60 per cent) cited lack of money while 55 per cent said feeling tired, 47 per cent claimed they wanted to stay with their children and 38 per cent said the hassle of organising childcare was a reason why they did not go out more and socialise.

Trapped in a Bubble, previous ground-breaking research by the Co-op and British Red Cross, identified that becoming a young mother was one of the life-changing events that can trigger loneliness. However it was one of the least likely to be recognised as an at risk group by the general public.

Now the Co-op and British Red Cross, who have been working in partnership for the past three years to help tackle loneliness, has recruited Home-Start, a leading family support charity, to expand its community-based support groups to help young parents who are lonely to gather, meet, talk and create their own support networks.

When asked what support would help people to feel less lonely, ‘meeting other young mums’ was by far the most popular suggestion, particularly amongst those aged 16-25, with more than 6 in 10 (64%) citing this as an option, making clear the importance of peer support.
Home-Start UK plans to establish parent support groups in 15 more areas across the country, reaching hundreds more young parents a year. These specialist groups will add to the broader British Red Cross services introduced in 39 communities across the UK, which are supporting thousands of lonely and isolated adults of all ages and backgrounds, including new parents.

Paul Gerrard, Group Policy and Campaigns Director at the Co-op, said: “People do not think of young mothers as being susceptible to being lonely but our research clearly highlights that it is a major problem.

“That is why we are delighted that Home-Start, with its specialist expertise in this area, will be helping lonely parents through its community support groups.”

Vivien Waterfield, Home-Start UK Deputy CEO said: “Having a baby changes your life in so many ways – and it can be a really lonely time, especially for younger mums when they don’t have networks of support around them. It can have a huge impact on their mental health and wellbeing. The number of mums telling us they are lonely or isolated has been increasing in recent years to almost 1 in 2 of all mums using Home-Start services.

“Younger mums often tell us that they’re reluctant to use existing services because of fear of being judged, which is why this collaboration with the Co-op and Red Cross to develop a range of new groups and activities that are especially for young parents is so important.”

Zoë Abrams, Executive Director of Communications and Advocacy at British Red Cross said: “Every day our staff and volunteers see first-hand the damaging effects of loneliness and social isolation. We know from our research that people of all backgrounds and ages are affected and that major life events can trigger loneliness. For some women, becoming a mother might mean they lose touch with their existing social connections and find it difficult to make new ones.

“Helping people feel better-connected in their communities and responding quickly when loneliness first takes hold is vital to reduce the serious impact felt by people. We’re proud to be working with Home-Start on a new project focussed on supporting young parents.”

• In 2015, the Co-op and the British Red Cross launched a new partnership to highlight and tackle loneliness and social isolation across the UK.

• A literature review conducted by the British Red Cross highlights the health-damaging effects of social isolation and loneliness, and the health-promoting effects of social support. Social isolation was found to be as strong a risk factor for morbidity and mortality as smoking, obesity, sedentary lifestyle, and high blood pressure (House et al. 1988).

• This was followed in December 2016 by a major research study from Kantar Public, ‘Trapped in a Bubble’. The research, which took six months, involved interviewing 45 expert witnesses, hearing direct testimony from more than 100 individuals who are experiencing loneliness as well as surveying 2,500 members of the general public. This informed the services funded by the money raised by Co-op colleagues, members and customers.

• Part of this money is being used by the Red Cross to provide vital care and support for thousands of adults of all ages experiencing loneliness and social isolation in 39 communities across the UK. More information is available at www.redcross.org.uk/lonely.

• These services are being supplemented by additional actions to ensure the partnership most effectively reaches those identified as in particular need of support – including this collaboration with Home-Start.

• Home-Start’s new parent support groups will start rolling out across all four nations of the UK over late Spring / Summer 2018, running for an initial period of 12 months. They will be focused in areas where they have identified particularly high numbers of young new mums at risk of chronic loneliness.

• The British Red Cross and Co-op also played a leading role as supporting partners in the Jo Cox Commission on Loneliness, working with 12 partner organisations during 2017 to start a national conversation on the scale and impacts of loneliness and how people can help. The Red Cross and Co-op are now taking forward the Commission’s work by leading a new national Loneliness Action Group and supporting the recently established All Party Parliamentary Group on Loneliness. Further information is available from LonelinessAction@redcross.org.uk

The Co-op Group, one of the world’s largest consumer co-operatives, with interests across food, funerals, insurance, electrical and legal services, has a clear purpose of championing a better way of doing business for you and your communities. Owned by millions of UK consumers, The Co-op Group operates a total of 3,750 outlets, with more than 70,000 employees and an annual turnover of approximately £10 billion.

The British Red Cross helps people in crisis, whoever and wherever they are. We are part of a global voluntary network, responding to conflicts, natural disasters and individual emergencies. We enable vulnerable people in the UK and abroad to prepare for and withstand emergencies in their own communities. And when the crisis is over, we help them to recover and move on with their lives. We believe in the power of kindness. That’s why we connect those who’ve got kindness to share, to those who need it most, every day. www.redcross.org.uk

Home-Start is one of the UK’s leading family support charities. It recruits and trains volunteers to support parents. Across the UK nearly 30,000 families and their 60,000 children work with 16,110 volunteers. Home-Start volunteers tailor their support to the specific needs of the parents and children of each family they support. Home-Start also runs family groups and social events for families in order to give children the best possible start in life. Local Home-Starts work with families struggling with issues including post-natal depression, isolation, physical health problems, bereavement and many others.