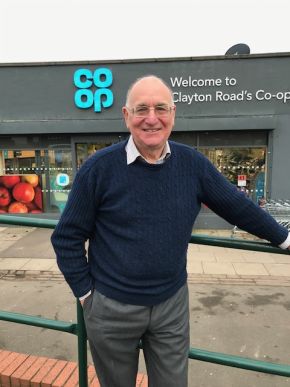 David Hallam is a former Labour Member of the European Parliament. He has worked on the shop floor of a co-operative and was an active member of USDAW. He was first elected to the Council in 2016. He opposed the withdrawal of the staff’s “double discount” and welcomes its reintroduction. He has raised several issues including the sale of sugary children’s treats, support for the British fishing industry, and the expansion of our funeral service.

Dear Fellow Members, I welcome the opportunity of standing again for the Co-operative Group National Members' Council. Many of you will know that I was the Member of the European Parliament for Shropshire, Hereford and parts of Worcestershire. I had a first class reputation as a champion for the region. Wikipedia describes me as “assiduous” in my duties as an MEP: I bring the same commitment to my role with the Co-op.

For many years’ I have had a close connection with North Staffordshire, which is something of a "Co-op heartland". I was the editor of The Potter newspaper for the Ceramic and Allied Trades Union based in Hanley. As recently as 2016 I was working full time in Newcastle Under Lyme on a short term contract.

I do recognise that with the sale of the pharmacy business, the closure of several food stores, and recent controversy over the bank, particularly in places such as Kidsgrove and Leek, many co-operators in that area have concerns about the future direction of the Co-op. Please be assured that I will be sensitive to the needs of North Staffordshire and have already urged that we extend our network of modern convenience stores.

I am disappointed that there are few Co-op Group funeral homes in Birmingham, the Black Country and Warwickshire. This is a huge disincentive to sign up for a funeral bond, I have urged that this excellent service is made more widely available with additional homes. Many people have been disappointed that the link between the Co-op Bank and the Co-op Group has been severed. Whilst the new owners are committed to retaining the Co-op's traditional ethical stance, I still believe that a long-term aspiration should be the repatriation of the Bank to the Co-op Group or the creation of a new alternative national mutually owned bank.

Co-operative Insurance offers good value and I am keen that together with our legal and funeral teams, the Group should expand services especially for people planning the last few years of their lives.

I am taking a great deal of interest in the online electrical business. I have urged structural changes which will make this emerging business a viable and economic way to buy first class goods with a very speedy delivery.

On a personal note, I am married with three children in their twenties. I run my own communications business, am a published author with another book on the parliamentary representation of women due out later this year. I am currently running a campaign to honour the memory of Britain’s first Black Head Teacher. I am a Methodist Local Preacher and regularly contribute articles to the Methodist Recoder. My home is in Smethwick and I regularly shop at the Bearwood, Harborne, Hagley Road and Edgbaston food stores. I do hope I can continue representing the West Midlands on the National Members' Council. I know the region and I am always prepared to listen to staff, members, and customers.