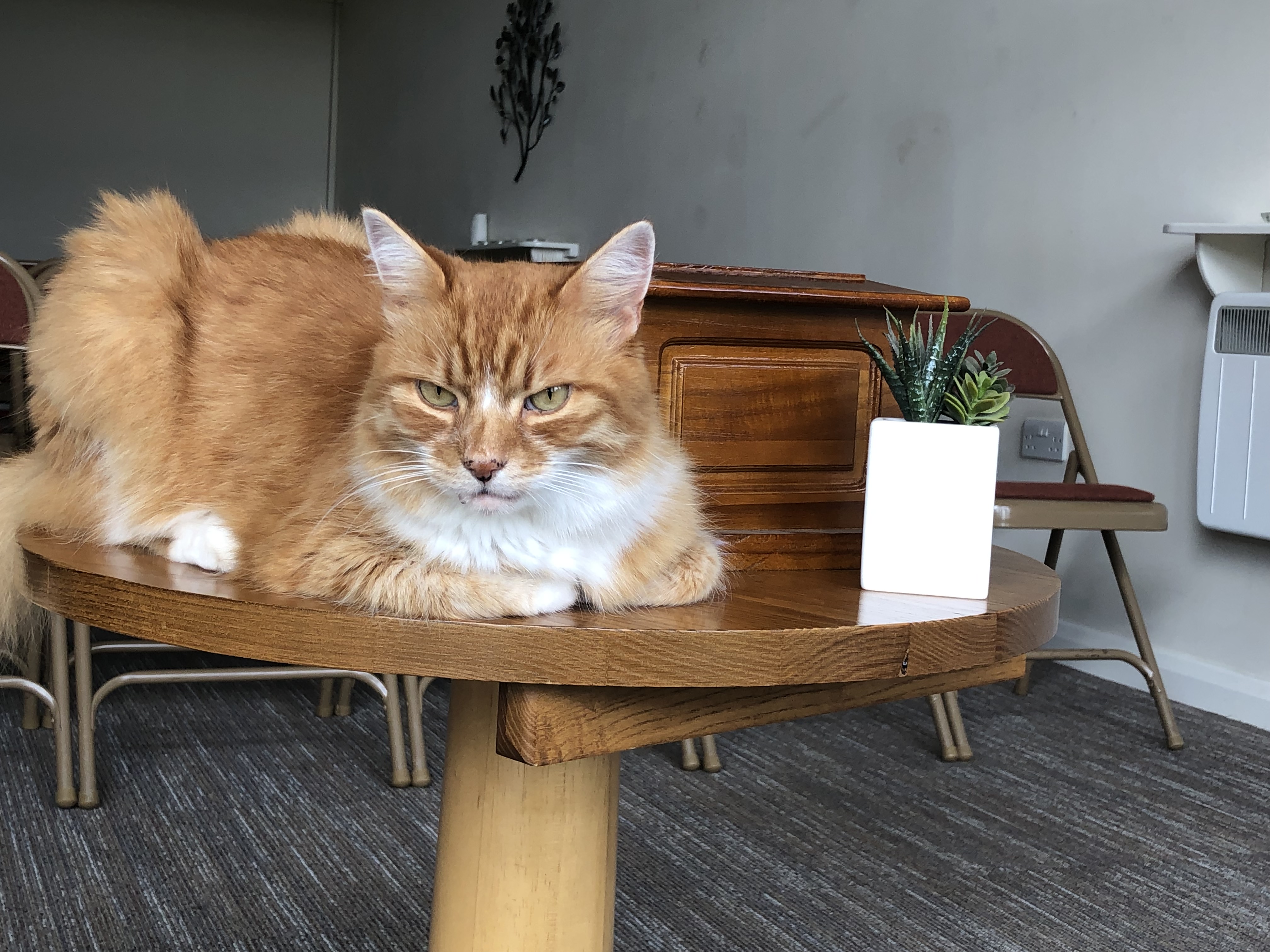 Paddy, an eight year old ginger tom cat, is laying claim to the title of Chief Moggy Mourner, as he’s thought to have attended more than 100 funerals over the years.

Based in the Wirral, in Merseyside, Paddy is a regular visitor at Co-op Funeralcare’s Mayfields Woodland Burial Site.

And when there’s a funeral taking place, he’s not just a spectator, but is there to take part. He often seats himself on the front row, or even leads the coffin down the aisle. He’s also been known to sit beside people in the burial grounds offering comfort and affection to those around. However he has never yet been a paw bearer.

Paddy was rescued from a farm, as an unwanted kitten by owners Christine Jones and Stuart Hague, and lives near to the woodland burial site in the village of Eastham.

Carole Paton, Funeral Arranger for the Co-op at Mayfields says:

“Paddy is such a special cat. He genuinely seems to have a sixth sense for when a funeral is about to take place, and will turn up just before to pay his respects. If the family then ask for him to stay, we allow him to attend.

“Every funeral we do at the Co-op is unique, but Paddy really does provide that extra special touch, helping provide comfort, affection and even entertainment for families at one of the most difficult times in their lives.

“His timing is impeccable. During one funeral service he made an appearance outside the window, just as the eulogy got to the part about the individual’s love of cats. And once when arranging a funeral with a client for her partner, it turned out the client had always wanted a ginger cat, but her partner had never agreed. Then in strolled Paddy, lightening the mood as if he was a sign from the beyond.”

“We have four cats, but from a kitten we always knew that Paddy had something unique about him. Three years ago Paddy went missing, and following an appeal, we learned of his day job at Mayfields. It didn’t surprise us at all. He absolutely loves people and is so well known in the local community, that he just wants to share his attention and time with those who are in need. It is so heart-warming to know that he provides such comfort to so many people when they need it the most. And when his day job has finished he comes back home and takes up his prime spots in our home for lots of his own fuss and attention.”

As a nation of animal lovers, research from the Co-op shows that pets and animals are increasingly playing a role in modern funerals, with three fifths (57%) of funeral directors having had requests for pets to be present at funerals. And a fifth (21%) have even had requests for a pet themed funeral.

Mayfields Woodland Burial is owned by the Co-op and sits on the banks of the River Mersey, with views over the water and towards Helsby Hill and the Pennines. It has a service centre for the funeral service seating up to 90 guests. There are also individual or family burial plots are surrounded by trees and wild flowers, and families can choose to bury or scatter ashes within the grounds. Co-op’s on-site Funeral Directors can take care of all funeral arrangements, organising a personalised and special funeral within a natural setting.

As the largest funeral director in the UK, Co-op Funeralcare conducts almost 100,000 funerals annually across over 1,000 funeral homes. The Co-op is also a national provider of later life products and services ranging from funeral plans, through to wills and probate.