A South Wales-based brass band has hit the right note with the Co-op as it stars in the retailer’s Christmas TV campaign (launched Sunday, ,1 December) which celebrates everyday Christmas moments and the heart-warming ways families’ show they care.

The Bedwas-based BTM* Brass Band have struck a chord with a touching version of The Pogues “Fairytale of New York” as the soundtrack to the Co-op’s new ad. 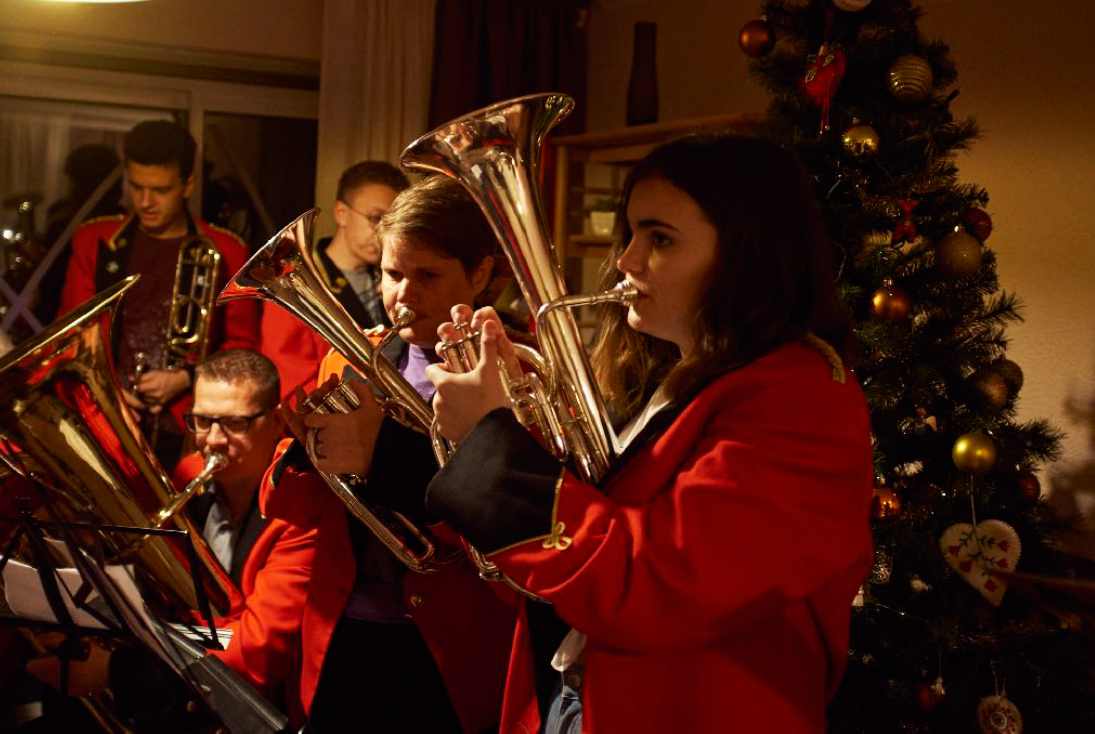 Co-op’s support for local community causes is also brought to life in the new ad - titled “Not-so-silent night” - and BTM Brass Band are featured in the tv ad as one of the more than 4,000 causes that the community retailer has supported with a £17 million hand-out this festive season through its Membership scheme.

BTM Brass Band will use the support from Co-op’s Membership scheme to buy new music and to refurbish instruments for youth bands - supporting its work to promote brass and percussion playing and to engage and inspire more young people to join in and, grow into the next generation of players.

Mark Hutcherson, BTM Brass Band’s Musical Director for its Next Generation Youth Band, said: “We are absolutely thrilled – it has been a very exciting project to be part of and we have been bursting to share our news with people and to see our band on TV this Christmas-time. The support of the Co-op makes a huge difference to the band and, all that we are striving to achieve as a society.

"Our band thrives on co-operation, working together and, community spirit. We focus on encouraging new players, of any age! and the progression of our children and young people of paramount importance. We encourage the young players to aspire to improve and, grow into the new generation of players who will take part in competitions, special events and festivals in our local community and beyond.”

As a convenience retailer, Co-op’s new advert is timed to coincide with the launch of its in-store Christmas offer. The ad continues the retailer’s recently launched marketing strategy of weaving its commercial and community messaging together, demonstrating its invaluable investment in local communities.

The Co-op’s Membership scheme sees the retailer give Members a 5% reward on purchases of own brand products and services at its food stores and funeral homes, and the retailer donate a further 1% to local community causes. Members are also able to choose which groups they would like to support online.

Ali Jones, Customer Director at Co-op, said: “Our Christmas ad shows the real and honest moments shared by our customers and members in the lead up to Christmas. As a convenience retailer, we’re often at the heart of the community and are proud to support so many local causes across the UK through the sale of our own-brand products and services at Christmas and all year round. This isn’t about grand, big-budget gestures but aims to show touching moments between families and the central role food plays in that while communicating that every time a Co-op product is bought, thousands of community groups receive funding.”

Created by Lucky Generals and launching with a 30-second ad during ITV’s “I’m a Celebrity…..Get Me Out of Here” on 1 December, the opening scene sees a woman arriving home from work late at night; her child is asleep in bed and her partner is waiting up for her. She surprises her partner with a box of Co-op’s Irresistible Mince Pies. The couple can be seen enjoying a moment together whilst eating their late-night treat but are interrupted when their little girl wakes up and appears at the door. The ad ends with the woman soothing her little girl with a cuddle, all the while the brass band plays.

Kate Murphy, Creative Director at Lucky Generals, said: “This ad features a very small festive moment, but it touches on something much bigger, about giving to the community. As such, it really captures the true meaning of Christmas, and the band’s brilliant version of a quintessential Christmas song is the star on the tree.”

Directed by Stacy Wall, the ad will also be accompanied by a 50-second online version, a 6-second version and reactive digital and outdoor ads.

Stacey Wall, said: “It was an honour and a privilege to work with Lucky Generals on such an elegant and simple idea for Co-op. The commitment and support Co-op provides to the communities they serve added truth to a spot intended as a Christmas card from Co-op to the UK.

“Once I heard the talented and kind members of the BTM Brass Band playing their version of the classic Pogues track, I knew all I needed to do was stay out of the way and make certain the cameras were rolling.”