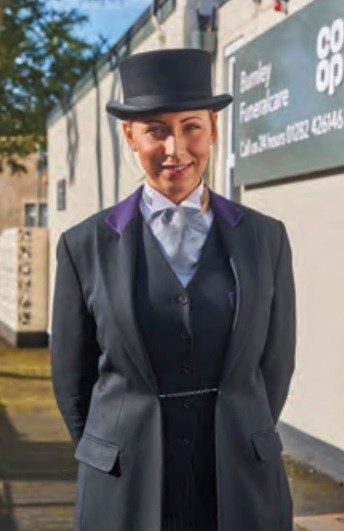 Burnley based Co-op Funeral Director, Annabel Davies, has been shortlisted for Best Bereavement Worker in the UK for the second year running.

After personally suffering a pregnancy loss of her own, twenty-eight year old Annabel retuned to work to support families going through similarly distressing circumstances.

Upon her return to work as a Funeral Director, Annabel sought ways to go above and beyond to support bereaved parents living in the area.

Annabel campaigned for local councils to offer free cremation services for infants, she also set up a support group for grieving parents and created a library of books, information packs and keepsakes.

Annabel has collected two cuddle cots, along with various sized Moses baskets and cribs, to allow parents to have additional and often essential time with their angel baby.

Working with neonatal departments from across the region, Annabel has also encouraged members of the public to donate knitted items of clothing for babies in special care units. To date, seven hospitals and a neonatal ward in Uganda have received donations.

The Butterfly Awards, now in its sixth year, recognises professionals working across a broad range of industries for the work they do supporting families through the loss of their baby. The awards also recognise families for the strength and courage they show during a bereavement.

“I am truly touched and honoured to have been nominated for such a meaningful award again. As Funeral Directors, we’re here to support people who are going through a heart-breaking time. The Butterfly Awards are an important step to make people aware of the support available for people going through the loss of a child.”

To find out more about Annabel’s nomination and to vote for her as the UK’s best bereavement worker, please head to: https://finleysfootprints.com/bereavement-worker-annabel-jayne-davies-co-op-funeralcare-profile-page/

Award winners will be announced at a ceremony in Kenilworth on October 19th.

The Co-op, which is the UK’s largest co-operative business with interests across food, funerals, insurance and legal services, has a clear purpose of championing a better way of doing business for you and your communities. Owned by millions of UK consumers, the Co-op operates a total of 3,750 outlets, with more than 70,000 employees and an annual turnover of approximately £11 billion.

Home to the UK’s leading funeral provider, Co-op Funeralcare conducts almost 100,000 funerals annually across over 1,000 funeral homes. Combined with its leading legal services business, the Co-op is also a national provider of later life products and services ranging from funeral plans, through to wills and probate