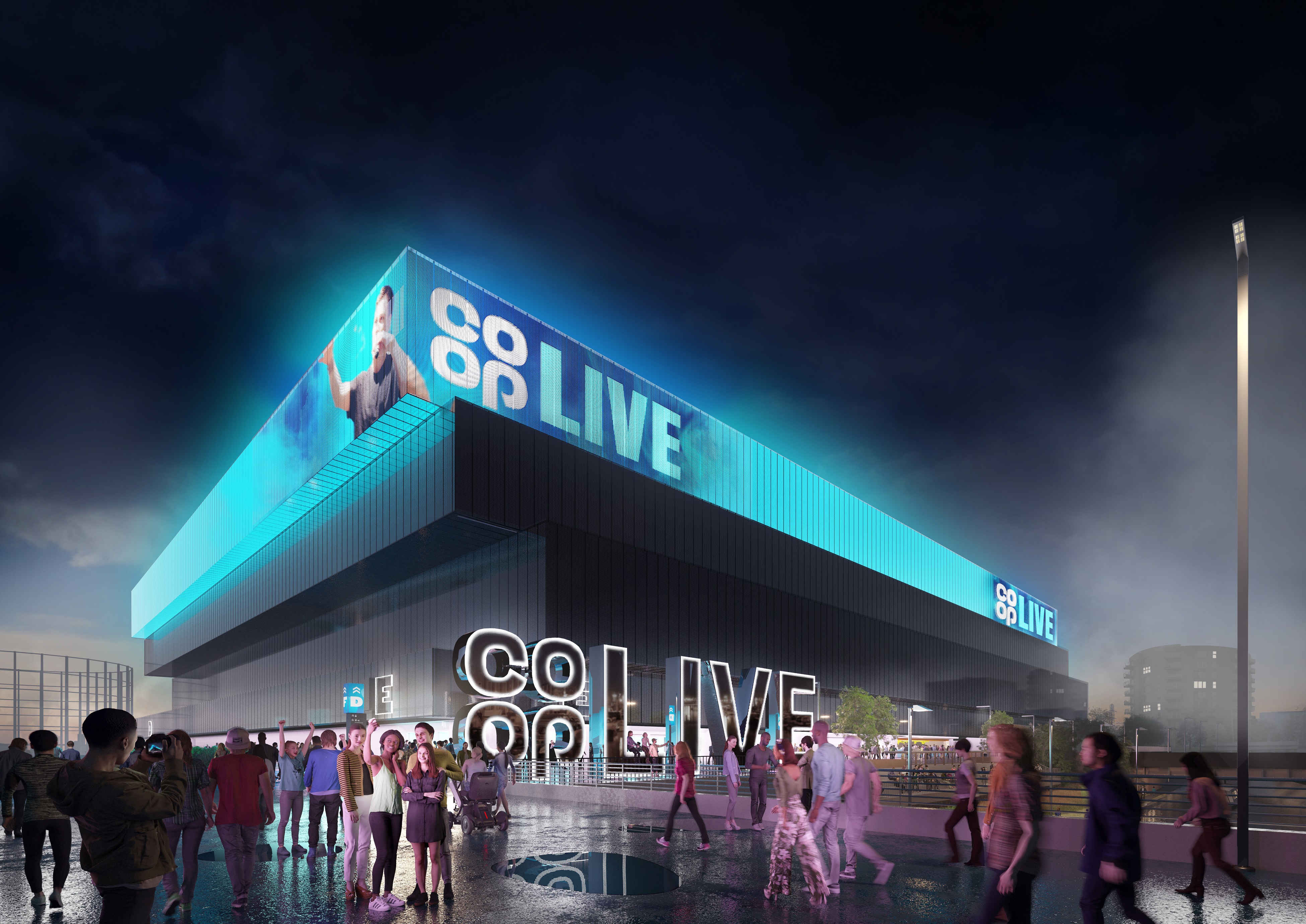 Oak View Group (OVG) and the Co-op are joining forces to develop the UK’s biggest and most exciting new arena in Manchester - with the project injecting £350m of private investment into the local area. Co-op Live will be one of the world’s premier music and entertainment venues, rivalling New York’s Madison Square Garden, The Forum in LA and The O2 in London. Plans for the arena were given the green light by Manchester City Council on 24 September.

The move will create 3,350 constructions jobs, starting from November this year, and 1,000 roles and apprenticeships on completion of the venue. The arena, named Co-op Live, will be located on the Etihad campus and continues the regeneration of the Eastlands area started by the 2002 Commonwealth Games. The construction project, the single-largest in the city, will give the regional economy a much-needed boost following the devastating impacts of the Covid pandemic and will boost the local economy by over £1.5bn over the next 20 years.

Member-owned Co-op, which is the largest consumer co-operative in the UK, has become a significant presence within the UK’s music scene, with pop-up shops at festivals such as Glastonbury, and is synonymous with Manchester, opening its first offices there in 1863. This project will see it playing a vital role in the continued development of its home city to showcase the power of co-operation and community and its vision to co-operate for a fairer world.

Around £1m a year will go to good causes across the UK – distributed by the Co-op Foundation - and the arena will be one of the most sustainable and socially responsible buildings of its type in Europe. It will be at the forefront of Manchester’s zero carbon agenda and help to tackle food poverty via a zero-food waste initiative. The Co-op is a strong supporter of apprenticeships and will back the arena’s apprenticeship programme and provide direct employment opportunities for its six secondary and college academies across Greater Manchester.

Once open, the Co-op will offer its members a whole host of exclusive benefits including: pre-sale tickets up to seven days before general release; discounts on food and beverage; hospitality experiences, the chance to win free tickets and exclusive, money can’t buy, backstage VIP experiences plus priority entry-access to the venue. The arena will also sell Co-op’s award-winning and ethically sourced food range.

Manchester was chosen as the location for OVG’s first international arena because of its iconic music culture and history as a live entertainment destination, which is why the arena was designed specifically with music at the forefront, unlike almost all other large arenas. Co-op Live will re-establish Manchester as one of the globe’s most important live music destinations as well as delivering new events to the city, including awards shows, international sporting events and tournaments, family entertainment shows and emerging formats such as eSports.

Steve Murrells, Group CEO, Co-op, said: “Co-op is set up with a clear goal to serve the interests of its members and invest for the long-term. The entertainment arena brings to life the co-operative difference and our vision to co-operate for a fairer world, from its sustainable construction, support for communities, zero food waste and member only exclusive benefits. It will not only enthral audiences, but every time people watch a live act they’ll be doing good in local communities across the UK.”

Jo Whitfield, CEO, Co-op Food, said: “Ethics are at the heart of the Co-op and we’re proud that one of the world’s greenest and most socially responsible live entertainment venues will carry our name. It will give millions of pounds back to local communities and good causes and we’ll make access to entertainment easier for our members with exclusive and pre-sale tickets.”

She added: “The coronavirus pandemic is having a significant impact and our multi-million pound investment is a signal of our intent for the future of the region, creating jobs and helping to bring some of the world’s best events to Manchester.” OVG, founded by Tim Leiweke and Irving Azoff, two of the live entertainment industry’s most influential executives, hopes to host its first event in the new venue in 2023.

Tim Leiweke, Chief Executive Officer, Oak View Group, said: “We’re delighted with this partnership and join together with the Co-op team to build the new world-class arena that Manchester deserves. Our shared vision with Co-op is what makes this partnership so special.

“Our partnership goes way beyond a normal naming rights agreement. The shared values will help define the ethos of the venue, including bold commitments on sustainability and community. I’ve said from the beginning of this project that this arena will be of Manchester, for Manchester and by Manchester, and this partnership with one of the city’s most iconic brands is a critical part of that. We can’t wait to work together to bring amazing live event experiences, in one of the world’s best arenas, to Manchester.”

Sam Piccione III, President, OVG International, said: “We started discussions with Co-op over a year ago, and knew from the very first meeting that they were the right partner for our new venue in Manchester. “We’ve worked hard together throughout the challenging recent months to bring the right deal together. Co-op is both one of the UK’s most recognisable brands and deeply embedded in the local community, so it’s a privilege to partner with them for the next 15 years.”

Following final confirmation from national planning authorities, the project will start creating over 3,000 jobs during a three-year construction period, all paying at least the Manchester Living Wage. Alongside the direct jobs, analysis shows the project will support a further 6,000 jobs in construction right across Greater Manchester. Once open, Co-op Live will create a further 1,000 jobs across a wide range of roles and skill-levels to put on world leading events with a world beating visitor experience.