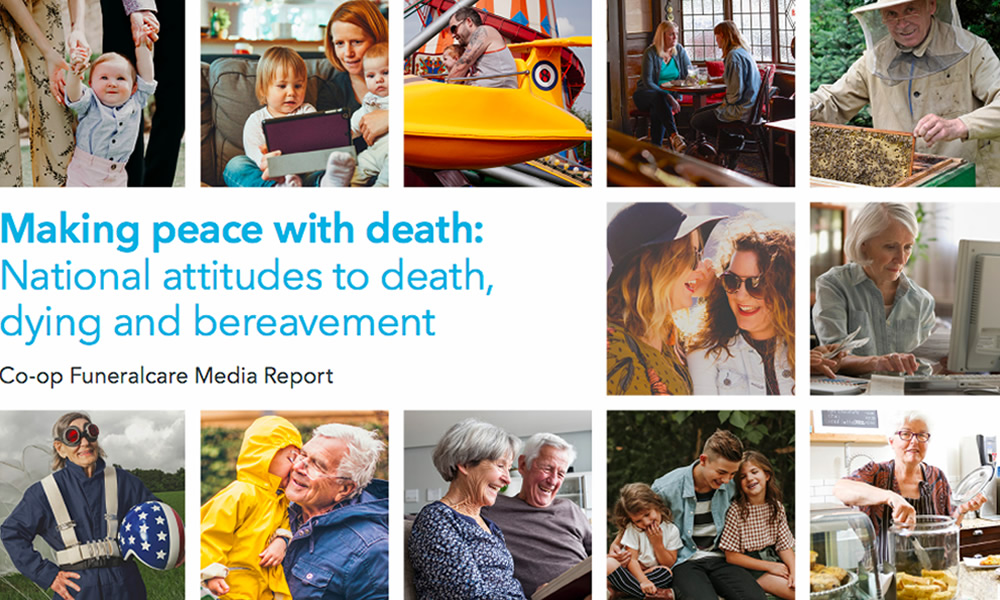 Findings of UK’s biggest ever survey into death and bereavement reveal:

Over 30,000 people have come a step closer to tackling the taboo of death, as Co-op reveals the findings of the UK’s biggest ever survey into death, dying and bereavement*.

The survey commissioned by Co-op, conducted by YouGov and supported by a coalition of national charities, was opened to the nation in May (2018). It is the first time national attitudes towards death have been looked at on such a scale.

Today’s findings, released in a broader report “Making Peace With Death”, highlight that further action is needed to tackle the nation’s last taboo. The research uncovered attitudes towards mortality, bereavement and the way in which the nation plans ahead for death.

Whilst we aren’t at ease talking or opening up to others about death, according to the findings, as a nation, people do think about their own mortality:

Findings highlight that life events and external news reports are amongst the top 10 reasons people consider their mortality:

Perhaps as a result of this, when it comes to experiencing a bereavement, the national taboo is having a detrimental impact. Findings reveal that:

Further findings highlight that grief remains hard to deal with long after a death. For many of those who were recently bereaved, the period immediately after finding out about the death (52%) or during the funeral (46%) were amongst the most difficult. However birthdays (26%), the anniversary of their death (25%), Christmas or religious festivals (21%) and the return to work (12%) were also referenced as times when it was hard to deal with grief.

In response to this, to help increase awareness about how to better support the bereaved, using the findings, the Co-op has produced the below guide, highlighting the most and least helpful things people have done for the bereaved following a loss.

A further area uncovered through the research, is how the taboo is leading to a failure to plan ahead.

Highlighting the impact of this, over 4 million UK adults may have experienced financial hardship as a result of someone’s death*****.

“We see increasingly that a failure to properly deal with death has a knock on impact for the bereaved, affecting mental health and also triggering financial hardship. We’re committed to doing right by our clients and more needs to be done nationally to tackle this.

“It’s overwhelming that the survey led to 30,000 people sharing their views. Now that we have such a wealth of insight on what stops the nation engaging with death and bereavement, we can start to address these areas and work with others to drive genuine social change.”

‘’This Co-op survey being on such a large scale is both convincing and fascinating. It gives us concrete evidence of the extent that death is unvoiced in our society and shows that we need to find a way to bring those thoughts and fears out into the open.

‘’The fear of talking about death, both their own, and of those they love, means that people are not receiving the support they most need at the time, and following their bereavement. This support is the predictor of their outcome, for good or ill. When someone dies it is the love and support of others that enables us to heal and find a way of living again.

‘’I welcome this survey as part of the wider Co-op campaign to improve the support and care of bereaved families.’’

‘’Death, dying and bereavement are unavoidable experiences that impact all of us, so it’s incredibly eye-opening to see how many of us are still uncomfortable talking about it. Having experienced a life threatening illness myself, I now have a completely different perspective on mortality and have realised how important it is to come to terms with it.

‘’It’s so important that these conversations become more of a norm and that it doesn’t take something drastic to trigger them. I’m sure that the work the Co-op is doing and the findings of its survey will help to drive positive change.’’

Ends
*Co-op’s biggest ever survey into death dying and bereavement was conducted by YouGov from 7th May to 25th June 2018 among over 30,000 UK adults. Further detail on the study can be found in Co-op’s media report

** Population figures calculated by the Co-op, based on YouGov figures.

*** Based on bereavements experienced in the last 5 years

The Co-op, one of the world’s largest consumer co-operatives, with interests across food, funerals, insurance, electrical and legal services, has a clear purpose of championing a better way of doing business for you and your communities. Owned by millions of UK consumers, The Co-op operates a total of 3,750 outlets, with more than 70,000 colleagues and an annual turnover of approximately £10 billion.