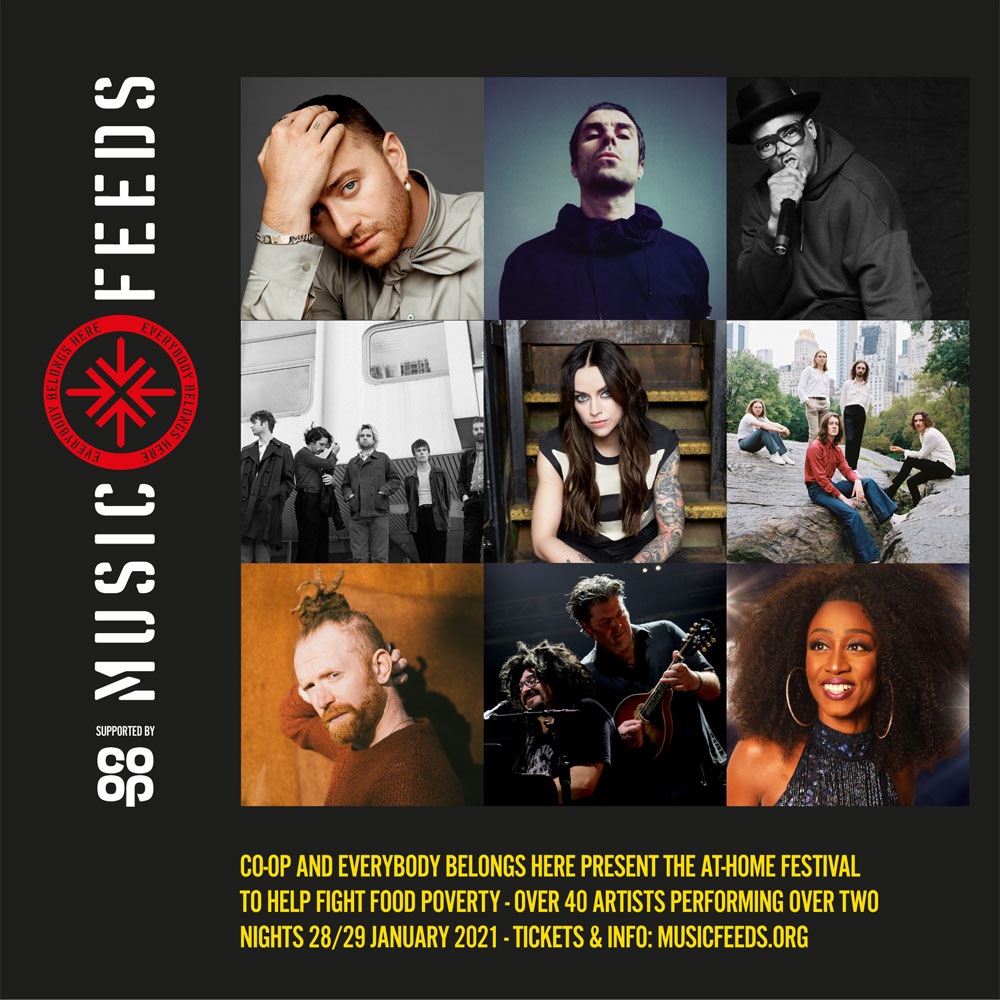 Tickets are now on sale for the exclusive two-day virtual festival called Music Feeds which has been organised by ethical retailer Co-op and Everybody Belongs Here, the promoter working to do good in the entertainment industry. Music Feeds will run over two nights on 28 and 29 January 2021, with all net profits being donated.

As part of Music Feeds, Co-op will donate a total of £1M, which will go to FareShare to fight food poverty - helping to provide around 2.5 million meals - and will also help two music industry causes Help Musicians and Stagehand, who care for musicians and live production workers during times of crisis. In addition, all net profits from ticket sales will be split among the three charities.

Co-op has campaigned hard to raise awareness of food poverty and was one of the first signatories to Marcus Rashford’s new Food Insecurity Taskforce. Co-op and Marcus first joined forces to help tackle the issue back in summer 2020 when the footballer starred in the retailer’s television advert helping to raise funds for the food charity FareShare*.

Jo Whitfield, CEO, Co-op Food, said: “Hunger knows no borders, and neither should our response. All year round, Co-op works to tackle food hunger and we’re thrilled to be uniting with outstanding musicians from across the world to turn up the volume on the issue. The pandemic has brought a sharper focus on issues such as food poverty and many in the music industry have seen their livelihoods disappear overnight because of lockdown restrictions. It’s right that we should lend our support and co-operate with musicians to raise awareness and raise funds for such vital causes.”

100 years ago, Co-op built dance halls for the masses, and even provided The Beatles, with a venue in 1962, and now the ethical retailer has become a significant presence within the UK’s music scene. It has had pop-up shops at festivals such as Glastonbury and Live Nation’s, Download, Reading and Leeds Festivals, and Creamfields. Co-op’s support for Music Feeds comes hot off the heels of an announcement that the retailer will join forces with Oak View Group (OVG)* to develop the UK’s biggest and most exciting new arena in Manchester - Co-op Live.

Jo Whitfield added: “Co-op is a growing part of the music scene and music lovers can enjoy great acts at Music Feeds in the knowledge they are acting towards creating lasting change on big issues, including fairer access to food****.”

Music industry veteran, and James band member, Saul Davies, is the creative powerhouse behind Music Feeds. He said: “At Music Feeds you’ll get never-seen performances from leading artists, uncover new bands, and get up-close and personal with interviews. The festival will be broadcast to your Smart TV and devices over two nights, and festival goers can even join the sofa mosh-pit via the simultaneous Twitter listening party. Additional artists who have been unable to perform have donated unique items for the companions Music Feed charity auction.”

Davies added: “With a single £15 ticket giving access to both nights, the festival is priced to allow as many people as possible to support the causes. There is also the option for festival goers to donate more. We are grateful to our ticketing partner DICE, who have significantly reduced their charges to only recover their costs. So, if you want to take positive action to end hunger, buy a ticket for yourself, buy one for a friend or donate one to charity, but please help by buying a ticket at MusicFeeds.org.”

Music Feeds takes place during the evenings of 28th and 29th January 2021, with a single £15 ticket giving access to both nights.

It is presented by Co-op, and Everybody Belongs Here. More information at MusicFeeds.org and tickets are available now at DICE.fm.

Notes to editors: The taskforce, created by the England International and Manchester United striker, aims to challenge the government to commit to significant policy changes to help tackle the alarming and growing issue of food insecurity in the UK today.

**Friday, 5 October 1962 The Beatles release ‘Love Me Do,” and headlined at the Co-operative Ballroom in Nuneaton.

*** The 23,500-capacity venue is the brainchild of the Oak View Group (OVG), who announced their plans last week following approval from the local council. Once completed, Co-op Live will be the UK’s largest indoor concert venue. Set to be located on the Etihad Campus, the site of Manchester City’s Etihad Stadium in Eastlands, it is currently hoped that the venue will be ready to be opened in 2023.

**** Since 2016, 21,000 community groups have shared over £70m through Co-op’s Membership programme and Co-op has raised funds and donated stock to provide over five million meals for the food charity Fare Share, which provides essentials to over 4,000 community food banks across the country.

Co-op £1M donation will be split will be split across the three UK charities; 70% to FareShare, 20% to Stagehand and 10% to Help musicians.

Music Feeds takes place on 28th and 29th January 2021 starting at 8pm UK each night, with a single £15 ticket giving access to both nights. It is presented by Co-op and Everybody Belongs Here, the music promoter who is working to do good in the entertainment industry.

The Co-op is one of the world’s largest consumer co-operatives with interests across food, funerals, insurance, legal services and health. It has a clear purpose of championing a better way of doing business for you and your communities. Owned by millions of UK consumers, the Co-op operates 2,600 food stores, over 1,000 funeral homes and it provides products to over 5,100 other stores, including those run by independent co-operative societies and through its wholesale business, Nisa Retail Limited. It has more than 65,000 colleagues and an annual revenue of over £10 billion.